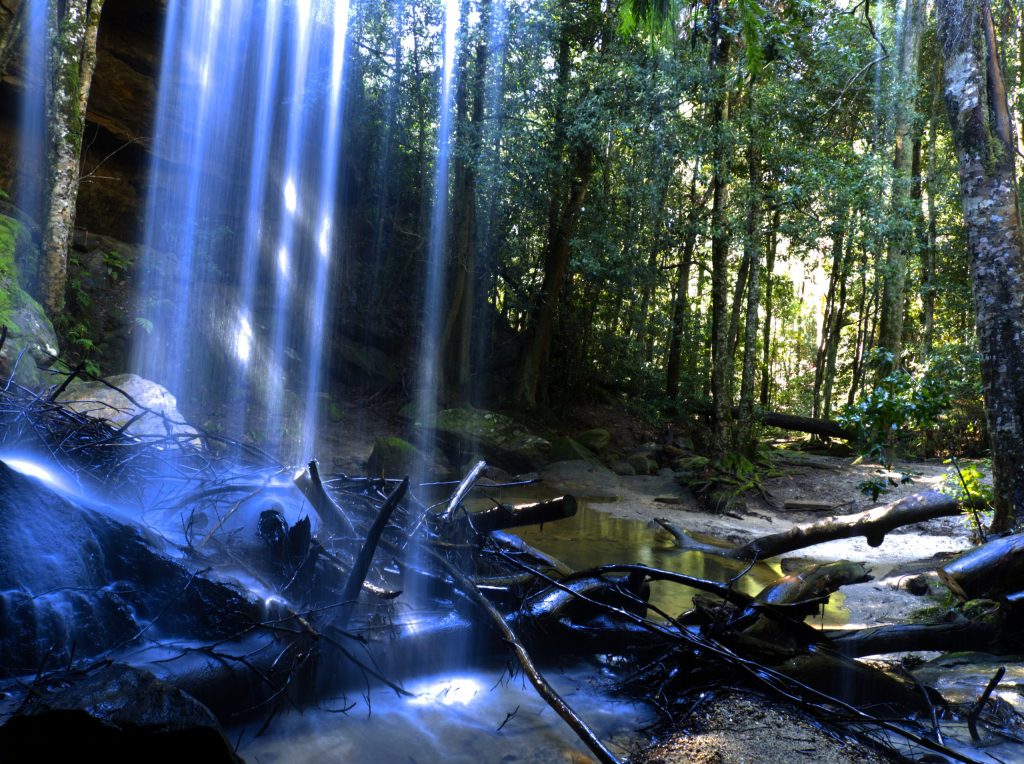 Living in the beautiful Blue Mountains of Australia, I have a pretty much endless reserve of walks at my disposal a short drive away. Yet there’s a few Blue Mountains bushwalks that rank in my favourites that I will go back to over and over again.

The lovely Horseshoe Falls in Hazelbrook is one of them. Not only is it a really lovely and not too difficult walk that is easy to fit in on an evening after work, but it is a beautiful spot for photography.

This post contains affiliate links. Making a purchase through these links earns a small commission at no additional cost to you and is a great way to show your support for this site.

The suburb of Hazelbrook in the Blue Mountains is located on the Great Western Highway 32 kilometres west of Penrith, 17 kilometres before you get to Katoomba. It isn’t a large town, like many mountains towns the commercial part of the town is situated alongside the highway and the railway line while the residential extends beyond. The commercial part has grown over recent years, with a number of new stores and restaurants now in the complex on the Northern side, along with the local supermarket.

There are two Hazelbrook waterfalls, Terrace Falls on the Southern side and Horseshoe Falls on the Northern, and they are a well known Hazelbrook feature. Neither are on tracks that fall within National Park, so they are among the dog friendly walks of the Blue Mountains.

Entry is approximately one kilometre down Oaklands Road on the right. It is almost on a bend so its a good idea to turn around in Brook Street in order to park in the clearing near the entry.

You will see a metal fence beside the footpath that sits above a creek. The signposted entry to the track is just beyond the fence.

This is a fairly short track at less than three kilometres. The entry sign says 2 hours return to Burgess Falls but I think this is a pretty conservative time.

The main track isn’t difficult, a few gentle slopes, stairs and boardwalks plus a creek crossing. It stays this way until it reaches the turnoff for Burgess Falls. The track follows the creek as it creates the waterfalls on its way to join up with Hazelbrook Creek.

Each of the waterfalls along the track is a deviation from the main path, and may involve some downhill scramble. The main track can get quite wet after rain, naturally the best time to ogle the waterfalls! Given each of the falls is low there also seems to be a tendency for fallen trees to collect near the falls, and I’ve often had to climb over to get the right angles for photos.

What is there to see at Horseshoe Falls Hazelbrook

This track is not only a pretty walk and nice and cool in the summer due to its sheltered position, but it also features a total of five waterfalls, two of which you are able to photograph from behind the falling water.

This is a popular local walking track so it is best to aim for an early start. I’ve had it virtually to myself in the evenings too.

The first waterfall which is a scurry off the main track has no sign indicating a name, and my research did not reveal one but I have been told by a fellow bush explorer that this is unofficially called Fairy Falls by locals. While it lacks the atmosphere of a couple of the others on this route, it is still worth the deviation for a look after a rainfall.

This is the highest of the waterfalls, so has the most sunlight. This is better photographed early or late in the day. Be aware that the rocks are quite slippery when in search of the best photo vantage point.

One kilometre from the entry off Oaklands Road and another scramble off the main track you will come to Horseshoe Falls. You may also see this referred to as Glow Worm Nook Falls, the sign at the falls seems to refer to it as both.

This is one of the falls you can walk behind for some shots through the water. I believe this may be the location of the Aboriginal shelter which I have found mentioned in my research.

Again, this is one to hit early if you’re hoping to do some long exposure photography on these falls, or use an ND filter to cut down on the highlights. You can check out my photography equipment and long exposure tips for more information.

My favourite angles for these falls are off to either side. 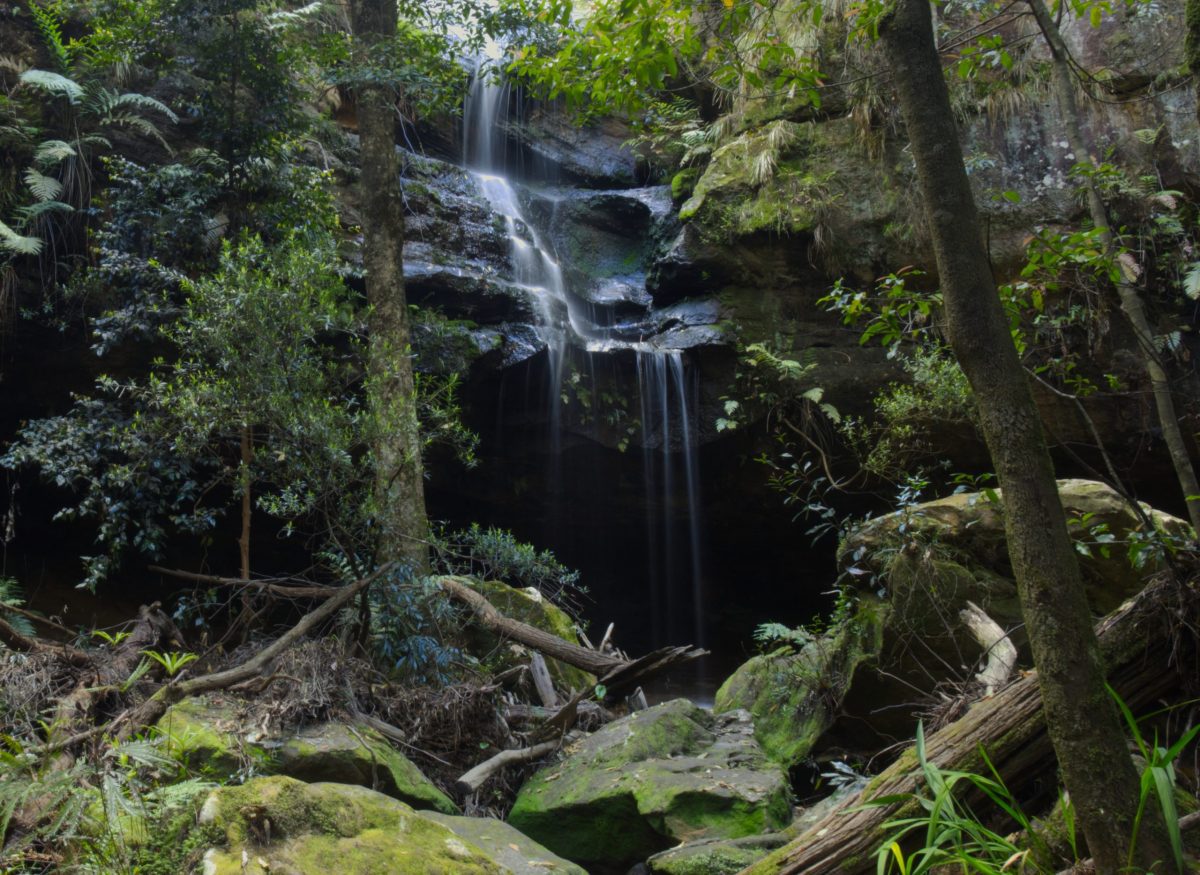 The above image may mean standing in the creek.

This image can be taken from the path leading to another waterfall.

If you are brave enough to venture down to Horseshoe Falls under the cover of darkness, you will find that it is one of the spots for glow worms in the Blue Mountains.

Contrary to the name, Glow worms aren’t actually a worm but a type of fly larvae called a Fungus Gnat. The glow attracts prey which becomes entangled in their sticky webs.

Glow worms are unique to Australia and New Zealand and in the Blue Mountains Glow worm caves are plentiful.

Both of these images were captured as long exposures, I suspect the first caught some ambient torch light which is why the rock was captured. Be sure not to shine light on the glow worms and don’t attempt to use flash photography, you won’t get the photo you want that way anyway! Turn off the light for a while and you’ll see more and more glow worms light up!

You can check out video of my experience below.

Glow-Worm Nook Falls is a smaller waterfall located uphill from Horseshoe Falls. It can be accessed by ascending the stone steps which can be seen in the first photo taken behind Horseshoe Falls and carrying on a short distance up.

It is not as picturesque as the larger waterfalls on the track and runs over several large rocks, so it is more difficult to photograph the full fall. 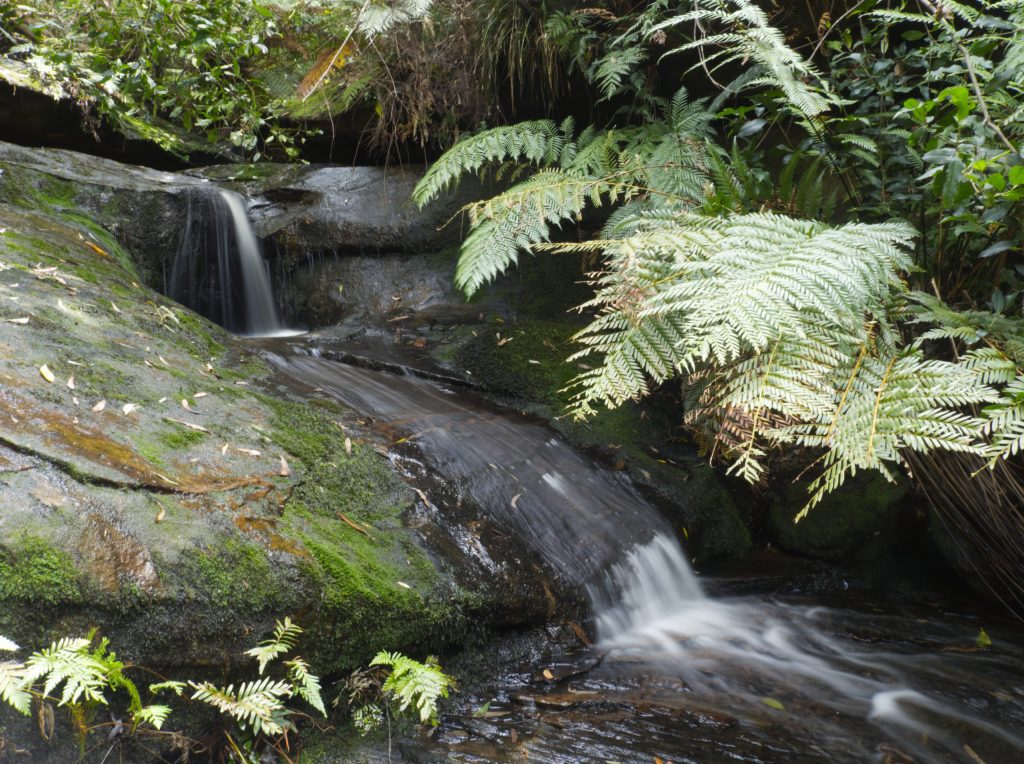 The next fall along the main track is Oakland Falls, at just over two kilometres from the entry, and this is without a doubt my favourite of the group. If you’ve brought small children along I’d advise having two adults, as this one involves a bit more challenging climb down rocks and you might want to pass the kids down.

This is another fall you are able to walk behind to photograph, and in my experience generally has a little more water flowing. In any case it makes for a spectacular and ethereal photo, you could almost swear this was a place for the faeries.

The last waterfall along this track is Burgess Falls, just short of the three kilometre mark. There is an upper and a lower track to Burgess Falls, for the lower you can continue along the creek from Oakland Falls and for the upper you can return up to the main track at Oaklands Falls. The upper track requires a bit of a scramble down an incline so I would recommend choosing the lower, and swing to the right when you come in sight of a creek crossing. The track will actually end at Burgess Falls. 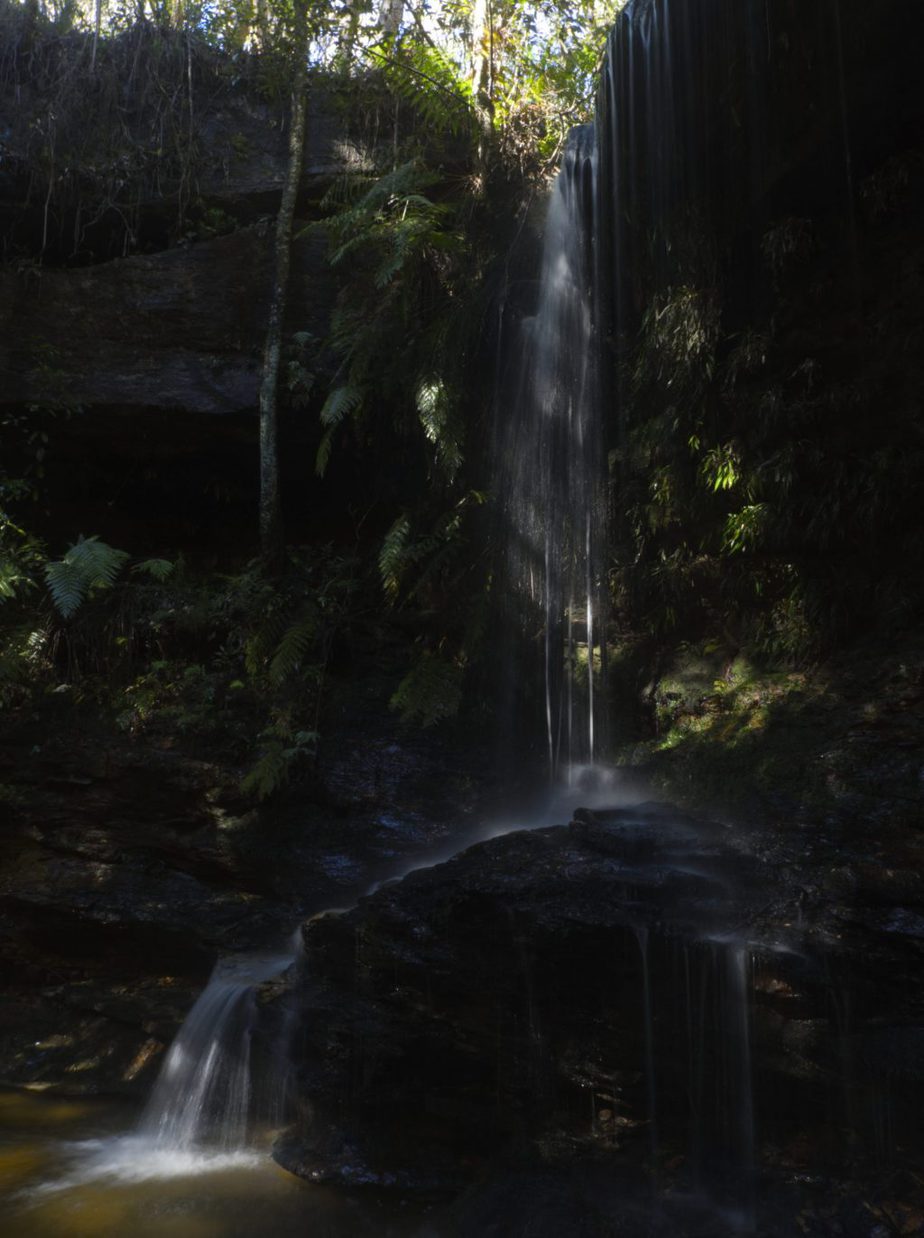 You can check out my video of the full Horseshoe Falls walking track below!

There are so many amazing waterfalls to find in the Blue Mountains! If you want to see more you can check out my list of the best – I’m always adding to it!

Safety in the Blue Mountains

While you should have phone signal through most of this track, its still a good idea to keep some basic safety principles in mind and carry basic equipment when bushwalking in the Blue Mountains. Check out these safety tips and essential equipment.

Where to stay in the Blue Mountains

Check out nearby accommodation options below.

If you’re interested in checking out the equipment I use and the results I get check out my photography journey.

I hope you enjoy your exploration of Horseshoe Falls Hazelbrook! If you liked this don’t forget to share!

1 thought on “The Ethereal Wonders of Horseshoe Falls Hazelbrook”