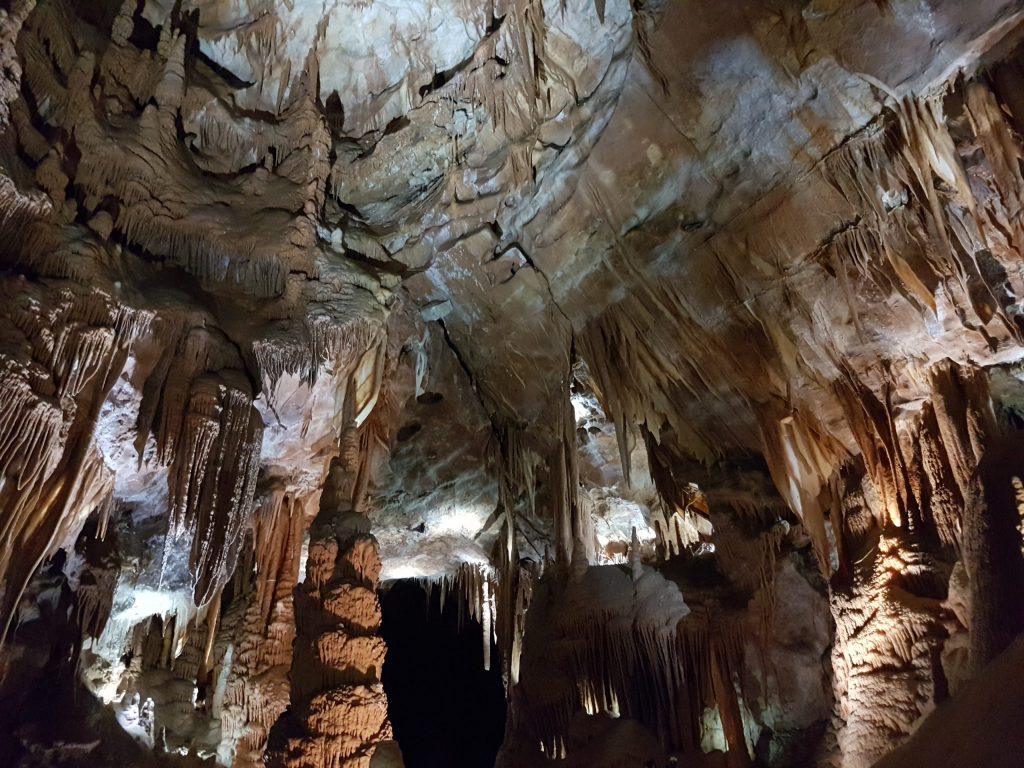 As one of the most famous systems of caves in Australia, and possibly the most spectacular,  Jenolan Caves should be on the itinerary for every blue mountains holiday. The caves form part of the UNESCO listing for the world heritage status of the Blue Mountains, and are the most ancient, as yet discovered, open caves in the world. They are also listed on the Australian National Heritage List.

This post contains affiliate links. Making a purchase through these links earns a small commission at no additional cost to you and is a great way to show your support to this site.

Why you should visit Jenolan Caves

According to Wikipedia, geological measurements have been able to date the caves and determine them to be approximately 340 million years old, the oldest known open cave system in the world. It holds significance to the local indigenous people of the Gundungurra and Wiradjuri who knew it as Binoomea, or ‘Dark Places’ among other names.  According to the official Jenolan Caves site, the caves are in the lands of the Burra Burra people, who were a clan of the Gundungurra Nation. You can read more about other Aboriginal sites in the Blue Mountains here.

It is generally accepted that the caves were discovered by Europeans around 1838, when a local livestock farmer by the name of James Whalan in pursuit of a known thief discovered this potential hideout. James revealed the location of the caves to his brother Charles and the two of them explored the caves in the years following. The Caves did not come under the protection of the Government until 1866, and were vulnerable to damage and souveniring from visitors prior to that. In those days the route to the Caves was via Tarana, a long roundabout route from Katoomba.

In the 1880’s Jenolan Caves had become more known as a tourist destination and local business in Katoomba campaigned for a more direct route from Katoomba. Several attempts failed due to the challenges presented by the landscape but eventually in 1884 a surveyor for the State Government was able to find a way that shortened the trip to approximately 42 kilometres from Katoomba to Jenolan Caves, or a five hour ride on horseback. This is the origin of the Six Foot Track, which is still an exceptionally popular multi-day trek in the Blue Mountains.

The Victorian-style Jenolan Caves house was built in 1898. The path between the car park and the caves entrance offers views of the grand structure. The 2020 Wattle Creek bushfire came within a few hundred metres of the building, which was saved by firefighting efforts.

As at December 2020 there are a reduced number of tours running, however the following are available;

There are normally several coach companies that go to Jenolan from Katoomba, however these are not currently running.

How to get to Jenolan Caves by car

From the Highway turnoff it is another 45 kilometres to the caves. The last part of the road is narrow and winding, however offers some beautiful scenery as it travels down into the valley to the cave system.

Jenolan Caves is also accessible from even further west at Oberon, via Edith Road. This route also offers the opportunity to check out the spectacular Kanangra Walls.

Be aware that the closest fuel sold is in Oberon, so fill up the tank before you go and check live traffic for any road closures.

Things to do at Jenolan Caves

Tour the caves of Jenolan Caves

Obviously, the caves themselves are the primary drawcard. There are a total of ten caves that are able to be toured, however the caves open at a particular time may vary so when planning your visit it is recommended to check the official site for the status of tours.

The following caves are open as at December 2020;

I’ve heard many people say this cave discovered in 1904 is Jenolan Caves best cave. Until I’ve been through them all myself I couldn’t say!

Like the Orient Cave, it was originally only accessible from the River Cave until an entry was cut in 1954. This cave is known for the high instance of Helictites, a mineral deposit which changes its axis from the vertical during its growth.

The Temple of Baal tour is one hour duration and includes 358 steps. It has a minimum age of 10.

The Orient Cave features large decorated chambers and is another commonly referred to as the best Jenolan Cave. It wasn’t discovered until 1904, well after Jenolan had been declared a protected reserve. It was apparently named for the most exotic place they could think of at the time it was discovered. It features the second largest shawl at Jenolan and can also be used as a venue for small weddings, however guests need to bring folding chairs.

The Orient Cave tour is one hour in duration and includes 358 steps. There is no minimum age for this tour.

Read a review of the Orient Cave.

Discovered by European’s in 1860, the Lucas cave was named in honour of John Lucas who campaigned for the preservation of the caves in the 1860’s. It has the highest and biggest chambers at Jenolan Caves, including the Cathedral Chamber at over 50 metres high which is often used for weddings and performances. It also features a glimpse of the underground river Styx. The River Cave is currently closed.

The Lucas Cave is also home to the Broken Column, an often featured image of Jenolan Caves. The crack was most likely caused by shifting of the debris at the base. 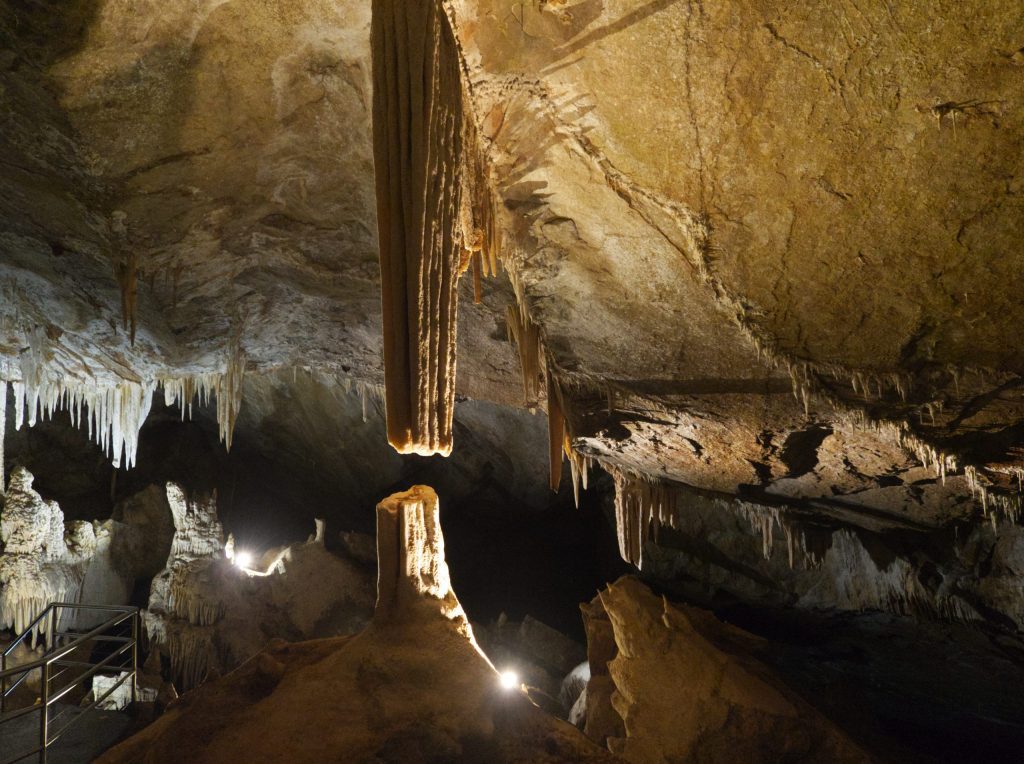 The Lucas Cave tour is ninety minutes duration and includes 910 steps. It also features a view over the Blue Lake from the entry, the only cave which does.

Discovered in 1879, the Imperial Cave is unique for containing the best fossil deposits and some bones of a Wallaby and Tasmanian Devil, the latter now extinct on the mainland of Australia. It follows the passage of an ancient river. The first cave guide at Jenolan discovered it and thought it was fit for an Empress.

The Imperial Cave is the easiest tour at Jenolan and is of one hour duration. It contains 358 steps.

Read more about the Imperial Cave.

This tour also features ‘Shawl Cave’ which is filled with many cave shawls.

Check out some of the highlights of the Imperial Cave Tour below.

Discovered in 1880 and originally known as the Left Imperial Cave,  it was renamed to the Chifley Cave in 1952 in honour of Ben Chifley, former Prime Minister and the local federal member. It was the first cave in the world with electric lights and coloured lights remain in the chambers today.

The Chifley Cave tour is of one hour duration and includes 421 steps.

Download the Jenolan App to your smart device and choose from six trails, including both above ground and underground options and the option to hear of the local Aboriginal culture as you discover the area.

Check out the unique geography

You don’t even need to do a cave tour to see some pretty cool stuff!

You will walk past this amazing structure on the 800m walk from the Carlotta carpark down to caves house. It is named after the daughter of the surveyor of the Devils Coach House cave. Jenolan’s Blue Lake can be seen through the trees below.

You’ll also walk past the Devils Coach House on your way!

If you continue driving past the carpark to go out the other side the road passes through the Grand Arch, which is the starting point for many of the cave tours.

It is one of only a handful of caves in the world where a road passes through.

There are a number of trail options starting from the caves, but even if you aren’t up for a more strenuous hike you at least should take the easy stroll that circles the Blue Lake.

The Blue Lake is a constructed dam created in order to meet demand to power lighting in the caves. The remainder of the hydro-electric system can be seen at the base of the dam. The colour comes from the refraction of light bouncing off limestone deposits.

It’s also home to the shy Platypus, so keep your eyes peeled and you might catch a glimpse!

If you continue on the track past the Blue Lake rather than looping back you may find yourself at this scene.

Wildlife you may see at Jenolan Caves

The Eastern Water dragons are plentiful and will likely run across the path repeatedly. They can stay under the water for up to thirty minutes if they feel threatened. They are harmless to humans if left alone.

You may see an echidna or two foraging around for food. They will ball themselves up when feeling threatened so as to be protected by their sharp quills.

Other wildlife you may come across includes Kangaroos, Wombats and Platypus, as well as ducks, Lyrebirds and a variety of Australian Parrots.

The large, heritage listed hotel has a number of rooms available for accommodation, perfect either for a romantic getaway or just a base for seeing the region.

The Chifley restaurant serves breakfast and dinner in the grand ballroom.

Book your stay at Caves House

A ten minute drive away from the caves but with views over the reserve, Jenolan Cabins include kitchenettes and laundry facilities and are ideal for a longer term stay.

Book your stay at Jenolan Cabins

Alternatively, stay a mere 20 kilometres away at Oberon.

I hope you enjoy your visit to this magical part of the world! If you liked this please share!

3 thoughts on “Caves of Australia; the Blue Mountains Jenolan Caves”