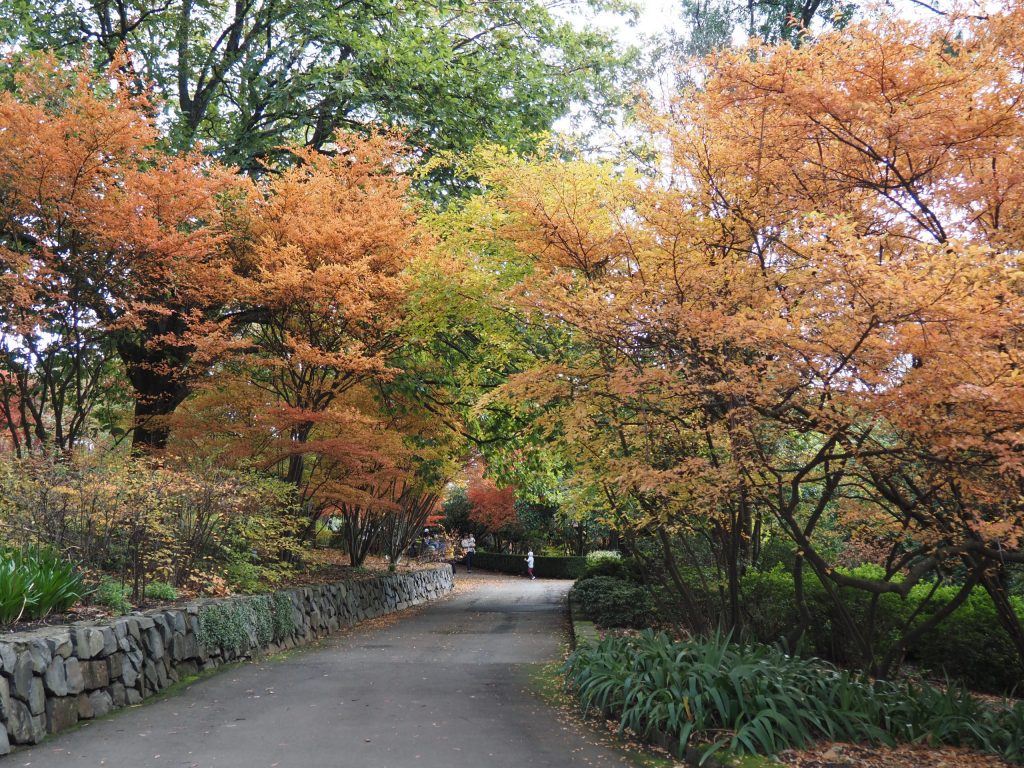 The Blue Mountains Botanic Garden at Mount Tomah is nestled away on 252 hectares in the World Heritage listed Blue Mountains National Park, just beyond the Hawkesbury region, and it is one of the best things to do in the Blue Mountains. It is the only Botanic garden in a UNESCO listed site in Australia. With 28 hectares open for public access it’s also free, so its a great way to spend a few hours without being an expensive day out.

This area was severely impacted by the Gospers Mountain bushfire in summer of 2019 and 2020. While the botanic garden itself was saved, visitors will pass through many areas that are recovering and local businesses can do with the boost.

My goal is to take some of the same images through the seasons to show how the Garden changes throughout the year. At any time of the year there is plenty to see, and one of my favourite things about this place is that I find something new each visit!

This post contains affiliate links. Making a purchase through these links earns a small commission at no additional cost to you and is a great way to show your support to this site.

How to get to Mount Tomah Botanic Garden

The Bells Line of Road runs up the other side of the Blue Mountains to the Great Western Highway, meeting up with it at Mount Victoria. It’s a popular scenic route for locals and visitors alike.

Located on the Bells Line of Road at Mount Tomah, the Blue Mountains Botanic Garden is an approximately 90 minute drive from the Sydney CBD, or 40 minutes down the Bells Line from Katoomba.

Your best bet for getting to Mount Tomah Botanic Garden is by car. You may find some companies running tours at some times of the year, but this isn’t a place you can easily get to by public transport unless you are prepared to pay for a 40 minute Uber or Taxi trip from Richmond train station.

The earliest dated rock art on Bells Line is from 7000 BC. The traditional owners of this land, the Darug people, are interwoven into the European history of this region. Once known by the Europeans as Fern Tree Hill,  Tomah is the Darug word for tree fern. The first European to visit in 1804 was a naturalist who realised the significance of the knowledge held by the local people and how valuable it would be to his research.

In 1823 two Darug men guided Archibald Bell Jr across the ridges from Richmond to the west. Bell had grown up on his fathers property in Richmond and had a reputation as a bushman and adventurer and worked closely with the Darug people. His reports of the fertile soils of the area led to an influx of settlers to grow fruit in the area now known as Bilpin. For his efforts Bell was awarded a land grant and the road was named after him. Little appears to be written about his Darug guides.

The Bells Line remained a drovers road until the 1870’s, wheeled vehicles beaten back by Mount Tomah.

The land of the present village and Botanic Garden was gifted to Mrs Susannah Bowen in 1830 and after staying in her family for a time it was eventually purchased by Alfred Louis Brunet in 1935. He cleared the basalt boulders and bracken covering the land and established a nursery for cool climate flowers including Iris, Lily and Tulips. In the 1930’s Alfred reached out to the Royal Botanic Gardens with the idea of the land being granted to them and after his death in 1968 it was surrendered to the crown, becoming the annex of the Royal Botanic Garden in 1972. It was opened to the public in 1987.

What to do at the Mount Tomah Botanic Garden

Visitors can join a 20 minute driving tour of the garden from the Visitor Centre. It is temporarily unavailable.

When: Daily, check times at the Visitor Centre

Cost: $12 per person. Children under five are free

Visitors can tour the Garden on foot with volunteer guides. Free tours are conducted at 11.30am on most days, but you can contact the Garden on 02 4567 3000 to confirm tours are running on the day you plan to visit. Bookings are not essential but group sizes are limited to 15 visitors.

For groups of four or more a personalised tour can be arranged highlighting the seasonal displays of the Garden.

When: As per arrangements which need to be made two weeks in advance

The Garden offers 90 minute tours with a horticultural expert which are tailored to the groups interests.

When: As per arrangements which need  to be made two weeks in advance

Cost: $41 per person with a minimum group size of ten.

Based on Japanese Shinrin-yoku, meaning forest therapy, this is a preventative health practice designed to improve wellbeing by immersing senses in nature. Participants are guided through sensory experiences, mindfulness and nature appreciation to reduce stress levels and lower blood pressure.

Nature Therapy Walks are conducted twice a day on Saturdays and run for two hours. Participants should be over 13 years old.

Bookings can be made online or by contacting the Botanic Garden.

When: Saturdays at 11am and 2pm

There’s plenty of open lawn spaces at the Botanic Garden and its common to see couples or family groups spreading out their blankets on the grass to share a picnic in the picturesque surroundings. You might even glimpse a wedding!

See what insects, reptiles and birdlife you can find!

If you are interested in Australian Native Birds check out some of the species local to the Blue Mountains.

With such a large area, its not too hard to find a place to enjoy some quiet reflection and the crisp mountain air.

Of course you are free to wander the grounds to your hearts content. If you have the kids along you can print out the Bush Trackers map they can follow along and complete the activities.

The Lady Fairfax walk is approximately one hour duration and runs from the Brunet Meadow to the Main Entry through part of the rainforest.

What to see at Mount Tomah Botanic Garden

Mount Tomah is broken up into three gardens, each containing plants grouped by geographical origin.

Made up of three distinct terraces, the Formal Garden is inspired by European garden design. It is located adjacent to the Visitors Centre and the car parks. The first terrace is a seasonal display garden which changes every season. The second is a lawn terrace which features whispering walls while the third is inspired by an Australian Landscape gardener, Edna Walling, and includes a pergola.

Located beneath the Fountain Terrace, the Rock Garden contains rocky plants from different continents which showcase the seasons. In winter South African Protea species are in flower and in Summer the Rock Garden features South American Bromeliads.

The Bog Garden features the special wetland habitat of the hanging swamp, which occur in this geographical region. The Bog Garden is comprised of five zones which includes rare Blue Mountains plants, carnivorous plants, mosses and other plants that love the cool climate.

Mount Tomah has a number of the famous Wollemi Pine in the grounds, making an important contribution to the conservation of this remarkable tree. It is one of the oldest and rarest plants in the world, dating back to the time of the dinosaurs, and there are less than 100 trees left in the wild.

Where to stay near Mount Tomah

While this is a frequently visited region, this is a rural area and it’s not the usual tourist hub, so you wont see big hotel complexes unless you head back to Richmond.

If you would like to spend a couple of days away from the bustle and exploring this area, check out the accommodation on offer in nearby Bilpin below.

I’m still working on more beautiful photos to show what you can see at Mount Tomah so save it for later and check back soon for more!