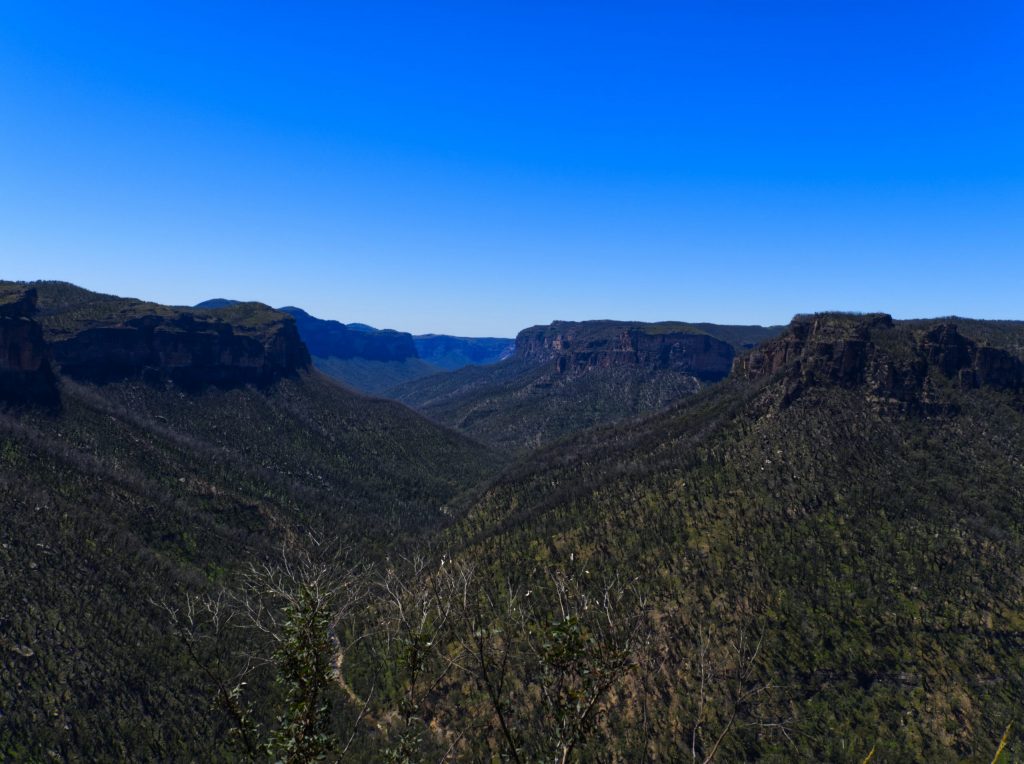 Let me just start off by saying that despite the Asgard reference, this has nothing to do with Marvel. Landmarks of this region were apparently named by a fan of Norse mythology.

It is however, about a recently discovered, and perhaps less known, addition to my favourite Blue Mountains bushwalks.

The Asgard Plateau is surrounded on three sides by cliffs and sits above the Grose River. It includes Ikara Head, Valhalla Head, Thor Head and Asgard Head (see what I mean about the Norse mythology.)

The majority of this walk is along a fire trail, with a few detours worth checking out that make the route more challenging, so you can choose how difficult to make it. The final hill on the way back to the entry is unavoidable, but its a reasonably easy ascent. Unlike a number of the best hikes in the Blue Mountains, you could potentially do this one without seeing anyone else on the track, which is pretty unusual in the mountains given the popularity of bushwalking as an activity. The day I did it we saw a single family of four the whole time.

By the way, in case you aren’t a local and don’t know what a fire trail is, it is a trail cut through bush that is wide enough for our bush firefighting trucks to drive down to access deeper areas of bushland. Most of these are gated so they aren’t generally accessible by regular vehicles.

This post contains affiliate links. Making a purchase through one of these links earns a small commission at no additional cost to you and is a great way to show your support to this site.

About the Asgard Swamp Walk

Distance: If you choose to take all the detours this walk is about 9.5 kilometres in and out.

Time: I did all of the detours, although stopped short of quite reaching Thor Head, and was back at the car in 3 hours 17 minutes, which was an easy pace that did include some lingering. You could probably add another 30 minutes to that if you climb up to Thor Head.

Difficulty: This is a medium level track but you can do an easier version by staying on the fire trail, the detours will definitely make it more challenging.

Things to know: This is one of the more exposed Blue Mountains hikes I have done, it is quite open and there is not a lot of shade. This is definitely not one to do on a hot day or even in the hottest part of the day so set off early. Depending on your phone network you may have phone service along much of this track but remember some essential safety principles just the same.

Turn onto Victoria Falls Road from the Great Western Highway at Mount Victoria. If you are travelling west this is a right turn before you come into the town of Mount Victoria, however there is no turning lane so if the road is busy it may be safer and easier to continue past and turn around to come back to it. This is a dirt road but it is fine for 2WD vehicles.

Much of this area was burnt in the January 2020 bushfires, so while the turn off for the swamp may usually be signposted, it isn’t currently. The fire trail is a little over 4.5 kilometres from the highway on the left, there are a couple of trails on the left in this area but the Asgard Swamp one is quite a clear and obvious trail.

If, after a little over a kilometre you have not come to the crossing over Asgard Brook pictured below, you are on the wrong track. This initial part of the track pictured on the other side of the brook is the hill you will need to tackle at the end.

The brook crossing will also offer you the first good look at the swampland you are passing through.

The scarring from the bushfires is very evident, as is the life returning. The Blue Mountains is one of the most bushfire prone areas of Australia and it’s flora is uniquely adapted to survive it. Many of the natives require the heat of fire to germinate.

The track to Pagoda Rock appears on the left a little over 2 kilometres from the entry, you can’t miss it, because its such a short detour that you can see Pagoda Rock from the fire trail. I have also seen this landmark referred to as Pyramid Rock.

As you can see from the image above this detour is a short, flat one, though it does involve some clambering up the rock to get the best vantage point of Asgard Swamp.

Walking behind Pagoda Rock offers views across Asgard Swamp, or you can take a short scramble up onto the rock for a view from above. There is a good sized camp site at the base of the rock.

The Asgard Swamp was a rich source of food and resources for the local Aboriginal people, and I have found numerous references in my research to this being a site of significance, including a photograph of a handprint listed as being at Asgard Swamp. I walked around and over Pagoda Rock and found no evidence of rock paintings or grinding grooves. However the mountains have plenty of Aboriginal sites you can visit.

Around the edges of the swamp can be found the remains of huts used by the mine-workers.

After you’ve finished exploring this area, head on back to the main fire trail and continue on.

A few hundred metres further along the fire trail is the unmarked track that leads to Thor Head.

This part of the walk will get more challenging as it is a narrow, uneven track that climbs for approximately 500 metres up to a cliff overlooking the Grose Valley. It is definitely worth it for the views though! To the east is Burra Korain Head.

Continuing along the top of the cliff will bring you in sight of Thor Head, an outcrop of rock offering unobstructed views over the Grose Gorge and over Asgard Swamp. On this occasion I didn’t take this scramble but definitely will next visit!

Return to the fire trail the way you came and continue on.

The next point of interest along this track is the McKenzie Mine, which is the most challenging part of the walk. It involves an uneven downhill climb, which isn’t too bad, but it is a steep climb out. Again, the trees don’t grow densely along this track and there is minimal shade, so this is not one you want to do under a blazing sun. The currently unsignposted track is on the left.

Confusingly, I found the MacKenzie Mine referred to both as a Coal mine and a Shale mine, and there is definitely Shale evident on the shelf in front of the mines entrance. As it happens the two were found together in seams in the Blue Mountains.

A heritage submission in 2016 listed the mine and nearby oven as the only industrial relics of their kind in NSW, representing the efforts of prospectors to find coal between 1860 and 1920. The tunnel was opened by Dr W F Mackenzie and Thomas Garret in 1881, but it appears to have never been commercially used, serving instead the purpose of being a test. According to an archaeological report referred to in the heritage application, there is a second tunnel to the south of the first one, which is the opposite direction to that of the oven. While I wasn’t looking for another path, I also didn’t note an obvious one.

The track descent to the mine is uneven, and fairly narrow and steep in parts. I haven’t been able to locate a reference to how far it is down to the mine, but it took about 10 minutes to walk down. Finally the path takes yet another turn and reveals a level rock shelf ahead. You don’t see the entrance to the mine until you are nearly on top of it.

The tunnel goes for between 20 – 35 metres in depending upon which source you take as authority, but in any case for safety reasons it is not advisable to go too far in. I was happy enough to go into the alcove a short distance in that was tall enough for me to stand. From other photos I have seen online it would appear that the tunnel gets wider.

A short distance beyond the mine is the still partially intact brickwork of a coke oven, never fired. The square structure has a domed roof rising to a brick Flue. Peering in the entrance from outside it appears to be quite a large space.

Remember it is a steep uphill climb to return to the main trail, but at least it isn’t overly long!

Once you reach the main trail you have the option to continue on for another half kilometre to head for the Asgard Head Lookout. This does involve a little clambering over uneven ground but it isn’t difficult, and well worth the views at the end. To the east you will look down the Grose Valley towards Burra Korain Head.

While to the south you will look towards Victoria Falls (that open area in the middle in the below photo.) Its a challenging hike that starts from the end of Victoria Falls Road and goes down the other side, but it is one of the best waterfalls in the Blue Mountains.

When you’ve finished enjoying the view head on back the way you’ve come to Victoria Falls Road.

This walk is number 4 in Blue Mountains Best Bushwalks, an investment I highly recommend if you are interested in hiking in the Blue Mountains. You can check out my video of the highlights below!

If you’re visiting from outside of the Blue Mountains why not make a weekend out of it and see some more spectacular scenery. Check out Mount Victoria Accommodation below;